The Redcoats are coming to the Inn Above Onion Creek! 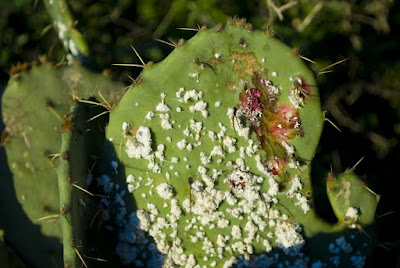 A strange white fungus-like substance has been forming on some of the prickly pear cactus at the Inn Above Onion Creek and they have quite a history that we'd like to share with ya'll. The fungus substance is actually a waxy protective coating around the Cochineal Scale, a small insect. Within that white covering is a deep red substance that was prized for centuries as a red dye for clothing.

Following is an except from an article by Scott Rodgers that explains some of the interesting history of this small insect.

When Cortéz and his conquistadors entered Tenochtitlan they were taken back by the bright red color of some of the clothing worn by the Aztecs. They had nothing like it back in Spain where they only had plant materials to dye clothes and the colors were not very bright. They were quick to seek out the source of this bright red dye. The source of the red color was from the cochineal scale, a small insect that attaches itself to the purple prickly pear cactus (Santa Rita Opuntia). When crushed this scale results in a bright red color When they found out the source, they sent some back to Spain where there was an immediate request for more. The demand for this resulted in it becoming a most desired export. It was second only to gold. The distinctive redcoats of the British Army were dyed with cochineal scale. Cochineal Scale scale remained the preferred source of red dye until the 1850’s when the first synthetic (aniline) dyes became available. Cochineal is still produced in South America and India. It is still used to color drinks, artists oil paints, food , and cosmetics. It is also used in the medical field as a biological stain and an indicator in acid base titrations. Cochineal scale is not listed on the ingredients in foods and cosmetics, they use the terms “carmine” or “carminic acid.” It is widely used in lipstick, rouge, sausage and some candies.